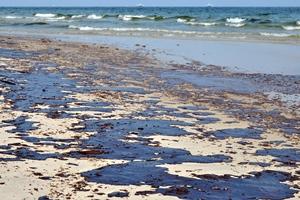 The United States Court of Appeals for the Fifth Circuit holds in In re Settoon that the Oil Pollution Act grants a responsible party a right to contribution for the recovery of purely economic damages from a partially liable third party.

(1) A tanker vessel allides with a bridge in the Houston ship channel while avoiding a collision with a negligently operated vessel. The bridge collapses, forcing a prolonged closure of the channel. Third-party carriers suffer significant delay damages but do not sustain any physical injury to their own property as a result of the bridge collapse and channel closure. These carriers seek to submit claims against the tanker that allided with the bridge.

(2) The same scenario, but the bridge does not collapse. Rather, the alliding tanker discharges oil into the channel. The channel is closed to control the recovery and cleanup process. As in the first scenario, the third-party carriers suffer significant delay damages as a result of the channel closure, but sustain no physical injury. These carries seek to submit these claims against the tanker that allided with the bridge.

Under the first scenario, the “hoary” rule of Robins Dry Dock will bar recovery of the carriers’ delay damages - they did not suffer physical damage to a proprietary interest. Under the second scenario, however, the OPA will permit the carriers to make a claim for their purely economic losses. These differing results are commonly understood. The more narrow question facing the Fifth Circuit in In re Settoon focuses on what happens next.

In In re Settoon, the Fifth Circuit examined, continuing with the imaginary scenarios above, whether the alliding tanker, as the OPA-designated responsible party, can pursue the other negligent vessel for contribution proportionate with that vessel’s comparative fault. As you can likely guess, absent the discharge of oil, the bright-line rule in Robins Dry Dock still carries the day. Although the OPA provides a specific provision addressing contribution, somewhat surprisingly, the Fifth Circuit and other maritime courts in the U.S. have never addressed whether a responsible party may seek contribution from a joint tortfeasor for purely economic losses. In re Settoon answers that question in the

The facts are straightforward and mirror the imaginary scenarios presented earlier. Two vessels were heading southbound on the Mississippi River. The M/V "HANNAH C. SETTOON", owned by Settoon Towing, LLC (“Settoon”), was towing two crude oil tank barges. The other, the M/V "LINDSAY ANN ERICKSON", owned by Marquette Transportation Company, LLC (“Marquette”), was towing twenty-one loaded grain barges. The "LINDSAY" began to stop just after it passed a bend in the river near Convent, Louisiana, in order to “top around” so that it could drop off three barges and head back upstream. The "HANNAH", which was traveling a few thousand feet behind the "LINDSAY", communicated with the "LINDSAY" to coordinate a “one whistle overtaking agreement.”

After the collision, the United States Coast Guard named Settoon the strictly liable “responsible party” under the OPA. In line with its responsibilities, Settoon managed the cleanup, remediation, and third-party claims for damages. Settoon then filed a Limitation of Liability proceeding pursuant to 46 U.S.C. §§30501-30512, et seq, in the United States District Court for the Eastern District of Louisiana. Marquette filed a claim in the limitation proceeding and Settoon brought a counterclaim against Marquette seeking contribution under the OPA and the general maritime law.

The OPA sets forth Congress’s intent to streamline U.S. federal law to provide for the quick and efficient cleanup of oil spills, disbursement of compensation to victims, and to internalize the costs of oil spills within the petroleum industry. As part of this statutory framework, the U.S. Coast Guard first identifies the “responsible party.” This party is “strictly liable” for cleanup costs and damages and is the party responsible for paying any claims for removal costs and damages that may arise under the OPA. United States v. Am. Commercial Lines, LLC, 759 F.3d 420, 422 n.2 (5th Cir. 2014). Claimants may recover economic losses absent damage to a proprietary interest from the responsible party, a bright-line exception to the long-standing American principle in maritime cases that purely economic losses are not recoverable unless the claimant can prove that it sustained damage to its own property. See Robins Dry Dock & Repair Co. v. Flint, 275 U.S. 303, 307-309 (1927); Louisiana ex rel Guste v. M/V TESTBANK, 752 F.2d 1019, 1022 (5th Cir. 1985) (en banc); 33 U.S.C. §2702(b)(2)(E). The only condition limiting recovery of purely economic losses under the OPA is that the loss must arise “due to the injury, destruction, or loss of real property, personal property, or natural resources.” 33 U.S.C. §2702(b)(2)(E).

Because Settoon suffered or paid purely economic loss damages, it sought contribution from Marquette for those losses, arguing that Marquette’s negligence contributed to the incident. Marquette argued that Settoon’s contribution claim did not arise under the OPA and was instead based on the general maritime law, and therefore subject to the restrictions of the Robins Dry Dock rule barring the recovery of purely economic losses.

The threshold issue for the Fifth Circuit was whether the OPA creates a statutory right to contribution or whether it merely preserves contribution rights under the general maritime law. Secondarily, if contribution is available “under the Act,” to determine the scope and whether the statutory grant allows a responsible party to recover purely economic losses from a joint tortfeasor. In answering these questions, the Fifth Circuit was tasked with first discerning the meaning of the statute.

Marquette argued that §2702(d)(1)(A) provides that a third party cannot be liable under the OPA unless it is found solely at fault. The court quickly dismissed this argument, analyzing §2702(d)(1)(A) as a provision that substitutes a solely-liable party as the responsible party, providing a subrogation remedy to the originally-named responsible party. The court further highlighted that §2709 deals with the concept of contribution “from title through content.” In re Settoon, 859 F.3d at 348 (5th Cir. 2017). If the court accepted Marquette’s interpretation, §2709 would be eliminated entirely and restrict a responsible party to seek reimbursement only from a party that was later-designated solely at fault under §2702. Based on the plain language of §2709, the Fifth Circuit held that the OPA provides that both subrogation and contribution are available “under this Act.” Id. at 347. But, because the OPA does not define the term “contribution,” the scope of contribution required further analysis.

To determine the limits of the OPA’s right to contribution, the court looked to the OPA’s standard of liability as adopted from §1321 of the Clean Water Act (“CWA”). See 33 U.S.C. §2701(17) (defining “liability” in the OPA as the standard set forth in the CWA); 33 U.S.C. §1321. The CWA provides that “liabilities established by this section shall in no way affect any rights which (1) the owner or operator of a vessel … may have against any third party whose acts may in any way have caused or contributed to such discharge.” 33 U.S.C. §1321(h). The Fifth Circuit previously held in a non-precedential opinion that the CWA does not create a right to contribution. See Tetra Tech., Inc. v. Kansas City S. Ry. Co., 122 F. App’x 99, 102 (5th Cir. 2005). Rather, the CWA merely preserves the right of contribution without serving as its source and that contribution rights are reserved to “other law.” This is because the CWA does not have a separate section addressing contribution. Unlike the CWA, however, the OPA specifically addresses contribution. The language of Section 2709 is clear: the OPA creates a cause of action for contribution. The express terms of statute support this and to interpret §2709 any other way would make it entirely superfluous.

Next the court examined what it means to be “potentially liable,” which is likewise undefined in the OPA. Returning to §2702, the section on which Marquette initially relied, the court recognized that if a third party is found to be solely at fault, they can be substituted as the “responsible party,” and are therefore potentially liable. But, a party cannot be substituted under §2702 until a fact-finder confirms or rejects complete liability. Until that occurs, the potential exists that an entity who played some role in causing the discharge may be liable. The court found support for this interpretation in case law analyzing similar language in the Comprehensive Environmental Response, Compensation and Liability Act (“CERCLA”), 42 U.S.C. §§ 9601, et seq. Based on CERCLA case law, the Fifth Circuit held that until a party is cleared of liability, it is at least potentially liable. See Elementis Chromium L.P. v. Coastal States Petrol. Co., 450 F.3d 607, 612 (5th Cir. 2006); OHM Remediation Servs. v. Evans Cooperage Co., 116 F.3d 1574, 1582 (5th Cir. 1997).

Takeaways for Members, the Club, and Practitioners
The In re Settoon holding is important for members and insurers involved in the movement or storage of cargoes presenting potential OPA liability. The court’s holding is a logical and equitable result. While the decision is not binding outside of the Fifth Circuit (Texas, Louisiana, and Mississippi), it is likely to find support among other circuits. With an increase in crude oil exports out of the U.S. expected in coming years, it is important that any member identified as a responsible party have counsel investigate any factors or parties potentially contributing to any discharge to potentially limit exposure via contribution under the OPA.