CPI and the Club celebrate over three decades together 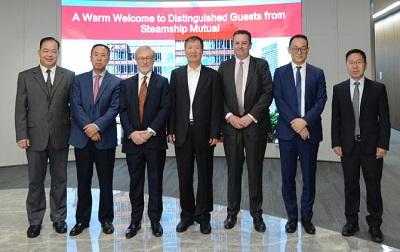 Gary Rynsard, immediate past Executive Chairman of the Club’s Managers, visited China P&I on 7 November 2019, to say farewell to old and more recent friends prior to his retirement in February 2020.  Accompanied by Rohan Bray and Eric Wu from the Club’s Hong Kong office, Gary was given a tour of the China P&I Centre, CPI’s modern headquarters situated on the Huangpu River in Hongkou District, Shanghai, before being welcomed as guest of honour at a dinner banquet.

In 1985 Steamship Mutual was the first International Group Club to establish ties with CPI through a coinsurance arrangement which has grown considerably over the years.  Gary was instrumental in the negotiations which led to the start of this relationship, and a number of CPI staff from that time were present at the dinner including Mr Wang Yu-Gui and Mr Hu Jingwu, each of whom have served as Managing Directors of CPI and Board Members of Steamship Mutual.

The Steamship / CPI programme today constitutes an important element of the Club’s membership, and speakers at the dinner noted the continuing cooperation between Steamship Mutual and CPI for over 34 years, and a shared desire to see further growth of Chinese entries with the Club in the future.

We are very grateful to Dr Song Chunfeng, current Managing Director of CPI and Board Member of the Club, and his staff for a memorable event.