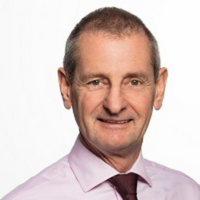 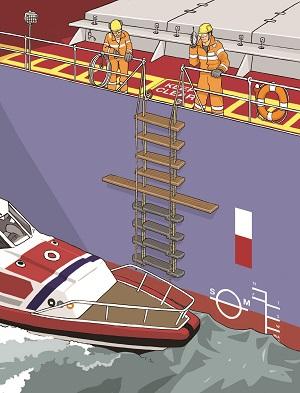 A new website “Pilotladder Safety” was recently launched and the Managers felt this to be a good opportunity, not only to highlight the availability of this website, but also to remind Members of other pertinent and important information that is available. This website has many useful sections including a checklist for the rigging of pilot ladders and links to various reference material on the subject matter.

The most hazardous part of a vessel’s voyage takes place in pilotage waters, and it is for this reason that pilots are engaged.

For a pilot, the process of embarkation and disembarkation, is the most hazardous part of any act of pilotage, ascending or descending a pilot ladder is risky, even in the most benign of conditions.

As weather conditions become adverse, the risks increase significantly. Therefore, for the sake of pilots’ safety, when preparing to rig a pilot ladder, it is very important to first check the structural integrity of the ladder and consider the method of rigging, ensuring that they are appropriate to the ship’s design, loading condition and environmental conditions.

Further, any incident resulting in the loss of life or personal injury of a pilot occurring during such operations as the result of a failure of those on the vessel to adhere to recommended safe practices can give rise to significant P&I liabilities.

Therefore, pilot boarding and disembarkation arrangements must at all times comply with the requirements of SOLAS Regulation V/23 and IMO Resolutions A.1045(27) and A.1108(29). IMO Circular MSC.1/Circ.1428 illustrates the pilot transfer arrangements required by SOLAS V/23. The circular includes drawings of ladders; rigging arrangements; pilot ladder winch reels and scenarios to be aware of. The boarding and disembarkation of a pilot must always be supervised by a responsible ship’s officer.

A Safety Campaign was undertaken by The International Pilots’ Association (IMPA) in 2018. The purpose of this campaign was to determine the level of compliance with requirements for safe pilot transfer arrangements during the year under review. It can be seen from the IMPA Safety Campaign report that over four thousand data returns were made by IMPA members worldwide on the safety compliance of boarding arrangements, of which 570 were considered non-compliant. In respect of the specific means of transfer there were 332 instances (Pilot ladder) and 151 instances (Combination) where non-compliance was found.

With regard to specific pilot ladder deficiencies there were 211 defects, 43.5% associated with the construction of the ladder, and of these, 87 defects, 41%, were due to the steps not being horizontal.

143 defects, 29.5% of the total defects were directly associated with the rigging and positioning of the pilot ladder, of which 57 defects, 40%, where due to the ladder not lying flat against the vessel’s hull. The photographs within the report illustrate self-evident safety deficiencies.

In 2012 IMPA and the International Chamber of Shipping (ICS), supported by the IGP&I produced the second edition of:- “Shipping Industry Guidance on Pilot Transfer Arrangements Ensuring Compliance with SOLAS”

Although the notice was issued in Australia, it serves as a useful reminder for all Members worldwide.

To promote safe pilot boarding and disembarkation operations, Members are recommended to distribute the IMPA and CHIRP reports to their fleet, together with other referenced material.

It is also recommended that the IMPA poster  depicting the required boarding arrangements for pilots is displayed on individual vessels.

The Club’s Loss Prevention poster on Pilot Boarding arrangements may also be of interest in this regard.

Pilot Ladder Safety – Do It Right The First Time