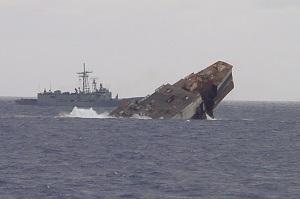 Local legal regimes vary widely, but an international convention is in place that aims to “promote the effective control of all sources of pollution of the marine environment”, and pursuant to which the contracting states have pledged “to take all practicable steps to prevent the pollution of the sea by the dumping of waste and other matter that is liable to create hazards to human health, to harm living resources and marine life, to damage amenities or to interfere with other legitimate uses of the sea.”. The 1972 International Convention on the Prevention of Marine Pollution by Dumping of Wastes or other Matter (which IMO abbreviates as “London Convention”) predates the MARPOL regime. It is currently in force in 87 countries (including Brazil). In 1996, a protocol was introduced which revised the system further. The 1996 Protocol is in force in 53 Countries. Where the 1996 Protocol is also in force, the 1972 London Convention is superseded.

The 1972 London Convention and its 1996 Protocol operate quite differently. A summary of the main provisions applying to vessels is as follows:

The provisions do not apply when dumping is necessary to secure the safety of human life or of vessels at sea in cases of force majeure caused by stress of weather, or in any case which constitutes a danger to human life or a real threat to vessels, “if dumping appears to be the only way of averting” or reducing any risk or damage. In such a situation (which may include a marine casualty), any dumping must be arranged “to minimise the likelihood of damage to human or marine life and must be reported forthwith” to the relevant authorities.

For any disposal, a permit is required from authorities in the contracting state, and Annex III of the London Convention provides for technical issues to be considered in all cases. States issuing permits must consider the characteristics and composition of the matter to be disposed; the characteristics of the dumping site and method of deposit; possible effects on amenities and marine life; possible effects on other uses of the sea; and finally, the practical availability of alternative land-based methods of treatment, disposal or elimination, or of treatment to render the matter less harmful for dumping at sea.

Overall, technical consideration is required before a permit can be granted to allow the disposal of a vessel, depending on the nature and materials of the vessel, her cargo and equipment, or anything else which may be on board. Although the provisions may seem permissive by modern standards, this convention was important in requiring states to cooperate to develop further provisions to counter pollution in future.

1996 Protocol to the London Convention:

The 1996 Protocol (in force from 2006) took a more stringent approach to the original 1972 London Convention.

Under the 1996 Protocol, all dumping at sea is prohibited except for wastes specified in Annex 1 (known as the “reverse list”). The reverse list consists of only 7 categories waste which may be considered for dumping at sea, which includes vessels. Material capable of creating floating debris or otherwise contributing to pollution must be removed to the maximum extent and any material dumped must pose no serious obstacle to fishing or navigation.

Annex 2 to the 1996 Protocol provides a detailed set of requirements to enable assessment of the suitability of materials for dumping. This includes, inter alia, a waste prevention audit, consideration of alternative options and monitoring requirements. It is generally the contracting state’s responsibility to prevent pollution and to ensure that dumping is avoided if possible, in favour of environmentally preferable alternatives. However, where a permit is granted, the requesting party will be responsible for paying for any actions required to avoid pollution.

The 1972 London Convention and the 1996 Protocol may in certain circumstances apply to permit the dumping of a vessel at sea, provided that detailed provisions are complied with to minimise the impact on the environment. It may be necessary to consider this option where there is a severe ongoing threat to the environment posed by the presence of a vessel following a casualty. Consideration would also be needed in respect of other legal provisions, such as the Wreck Removal Convention, the Civil Liability Convention or the Bunker Convention.

Any application under the London Convention or the 1996 Protocol would only be made as a last resort and only where to do so would reduce the net environmental impact.

Further information is available from the IMO’s related webpage: https://www.imo.org/en/OurWork/Environment/Pages/London-Convention-Protocol.aspx